I finally saw Birdman last night and was blown away for many reasons, not least of which was the acting. I normally don’t bother to rave about the acting in a film of that level; I assume there’s no need, that great acting will be a given. But Birdman is not just a film with great acting; it’s a film about what makes great acting. It’s a dissection of acting as an art, about uncovering thoughts and emotions that are hidden but when revealed seem exhilaratingly obvious. 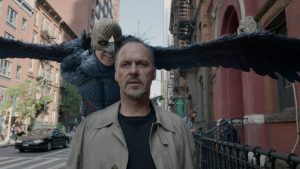 The film is subtitled “The Unexpected Virtue of Ignorance,” which on the surface makes reference to a critic’s backhanded compliment of Michael Keaton’s character and his play. But it also reminds me of an interview with Orson Welles, who, when questioned about Citizen Kane‘s revolutionary film techniques, responded that, as a novice filmmaker, he simply “didn’t know what you couldn’t do.” That is one of the most valuable lessons I can take from life. While Dirty Harry may have said “A man’s got to know his limitations,” how often are we stifled by perceived limitations based on what we’ve been taught, rather than what is actually true or possible?